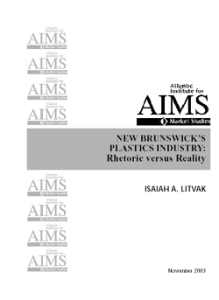 New Brunswick’s Plastics Industry: Rhetoric versus Reality by internationally-renowned business analyst and academic I.A. (Al) Litvak says, “attempts to develop New Brunswick as one of North America’s top plastic production centers is “yet another misguided, publicly funded effort at industrial planning.” From a base of less than 1 percent of Canada’s production, New Brunswick has launched a drive to become a significant North American plastics products manufacturing region. The momentum behind creating such a centre grew out of two highly publicized plant-site consulting reports which Dr. Litvak says base their findings on characteristics that are inappropriate for the local industry. The paper also points out several other serious deficiencies that must be recognized, among them:

Human resources are weak in the specialized categories the industry requires. Knowledge resources are underdeveloped, with the relevant postsecondary education sector being relatively small.

Demand conditions are poor, with New Brunswick’s underdeveloped industrial base providing little in the way of a home market. The absence of plastics products supporting and related industries

Dr. Litvak acknowledges the good intentions and political advantages of the government’s strategy but goes on to say, “Politicians and government bureaucrats are among those least qualified to pick industrial winners and losers. At best, they lack the specific business knowledge of the sophisticated investors they are attempting to attract. At worst, they may inadvertently create subsidized competition for existing businesses.”