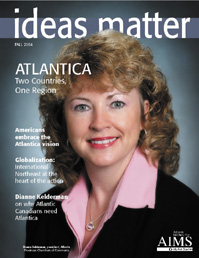 Atlantica: the International Northeast Economic Region (AINER) is defined chiefly by geography, economic trends and trade patterns; common problems and experiences;
and politics. Much of this wedge of territory has been outside the charmed circle of North American prosperity for years.

The reasons are buried deep in our history. Especially after the Americans rejected Reciprocity and Confederation was born, the continent was divided into two national projects. Each sought to open up its half of the continent on an east-west axis. Each had a funnel on the East Coast that caught the energies of Europe and channelled them
toward the conquest of the continent.

Montreal, the second most important commercial city of the British Empire, was Canada’s point of contact. The urban Eastern Seaboard, from Boston through New York, Philadelphia and Washington, was the American equivalent. In a world of two half-continental enterprises organized on an east-west axis, Atlantica is the reef around
which the movements of people, capital and innovation surged, one heading south, the other north.

Confederation in 1867 added a layer of politics to the Canadian picture. Maritimers and Newfoundlanders were intrepid traders who had built their own trade links around the region and the world, reaching out to the Boston states, the Caribbean and Europe. But the newnation, with its policy of favouring Central Canada through high tariff barriers, in the words of one historian pushed the Maritimes 1,000 miles further out to sea and away from its natural markets.

Politics added insult to injury. The cumulative effects of more than a century of policies favouring the population centres of Quebec and Ontario has been crumbling infrastructure and federal policies that more resemble the management of genteel decline for the Atlantic Canadian provinces than a recipe for economic dynamism. Various forms of massive transfers to provincial governments, industries and individuals have all masked the need for substantial economic change and adjustment.

Likewise, the northern New England states, failing to recognize their common interests, also failed to act as a coherent region politically. That meant that larger population centres and regions with more political weight (whether nearby metropolises such as Boston and New York City, or more distant but self-aware regions such as the South) were more successful in creating economies with complex infrastructure and competitive strengths in the global economy. In other words, a local culture of independence, autonomy and “going it alone” stymied the emergence of common economies that, in turn, foster regional consciousness and regional political power. As a result, when these states seek federal intervention and support for their development, they are frequently bested by states that act as regions. The decline of the US part of AINER may be more recent than that of, for instance, Atlantic Canada, but the decline itself in recent decades hasbecome unmistakable.

But this edition of Ideas Matter demonstrates how continental free trade and globalization could put an end to the isolation of Atlantica. The east-west axis for development of North America is being supplemented by a drive to stitch back together the old north-south trade routes that had flourished across the continent before 1867.

Due to the large number of graphics, the pdf of Ideas Matter #4 is available in three parts:

Part 3 – Tales of the Silk Road