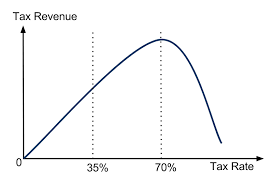 The two new high-income tax brackets were intended to raise $30 million in additional revenue annually, according to then-Finance Minister Roger Melanson. However, a new report released by Statistics Canada suggests that the combined federal and provincial tax bill for the richest 600 New Brunswickers in 2015 was $5.8 million less than in 2014, despite the spike in tax rates.

The Laffer Curve is a theoretical model which suggests that New Brunswick has increased taxes to the point where there is diminishing returns of tax revenue, and consequently of harming their own economy. Economic activities that generate income are impeded when tax rates become too high. Think of it as being like the temperature in summer: up to a point, more people will go outside to enjoy the good weather. But if it continues to get hotter and hotter, people flee the heat, and find cool places to take refuge. So it is with taxation: when people and businesses are taxed too much, they either find ways to decrease their taxable income, or leave for less-punitive tax climates, leaving tax collectors with lower revenues.

When plotted on a graph, the Laffer Curve looks like an inverted-U. Governments sometimes look for the “revenue maximizing point”, which is the peak of the Laffer Curve. But New Brunswick seems to have raised their tax rates past the revenue maximizing point. This seems evident when considering the drop in tax revenue collected from the richest New Brunswickers in 2015, after their tax rates jumped from under 18 percent to nearly 26 percent.

Although New Brunswick cut income taxes again in 2016, their tax rates still remain high enough to damage the economy. A 2012 study shows that $20 worth of economic damage is inflicted on the private sector for every tax dollar collected when governments set their rates to the peak of the Laffer Curve.

It is increasingly evident that New Brunswickers are at a breaking point, and cannot be squeezed for any more funds. The number of full-time workers—those most likely to pay income tax—has essentially remained stagnant for the last decade, hovering between 294,000 and 304,000. Demographic trends don’t point to any great future improvement in this figure and it will certainly not be aided by tax rates that further discourage economic activity.

Governments can’t just focus on maximizing their tax revenues by setting tax rates to the top of the “Laffer Curve”. They must think of the health of the economy, and this means they must stay on the lower portion of the curve. Collecting more from New Brunswickers will only cause more damage and discourage investment, entrepreneurship and employment generation.

Some people argue that we should “ask the top one percent to pay a little more.” But this is like turning up the heat in the summer: we will see, as the evidence from 2015 already shows, that the top one percent will reduce their activity, find a cooler tax climate, and end up paying less. And, as tax revenues decline among the highest income earners, the tax burden will end up being shifted to mid- and low-income earners.