In his Telegraph-Journal column, AIMS Vice-President of Research John Williamson suggests that New Brunswick’s government should commit to a limit on increased spending of one percent per year, to combat uncontrolled expenditure increases. This action, he argues, “would largely offset inflation and put downward pressure on the province’s spending arc.” Read this article on the Telegraph-Journal website.

New Brunswick raised its Harmonized Sales Tax (HST) on Canada Day to 15 per cent, joining slow-growth Nova Scotia and Newfoundland & Labrador with the highest HST rate in Canada. Taxpayers were told the two-point HST increase is needed to control our province’s deficit, which today stands at $347-million. But that isn’t happening. Instead, the HST hike is fueling a growing provincial government.

Our province last tabled a surplus budget in 2007. According to the figures from the provincial auditor, the last nine budgets accumulated a staggering $4-billion in added debt. Today, our province’s total debt stands at $13.5-billion. On a per capita basis, every man, woman and child owes New Brunswick’s creditors nearly $17,900. Interest payments to service that debt cost New Brunswick taxpayers $700-million each year – tax money that cannot be spent on health, infrastructure or used to boost the economy with tax cuts.

Voters that support paying higher taxes to eliminate the deficit have been sold a false bill of goods. According to the 2016 budget, the added HST revenue is being spent instead of erasing the red ink. It is anticipated that the higher HST will boost provincial revenues by $277-million this year. Meanwhile, program spending (that is everything but debt interest) will jump $289-million. The government is taxing more to spend more.

We are now one of the highest taxed provinces in Canada – before our July 1 HST hike, business taxes increased along with income taxes paid by working families. New Brunswick is also taxed more heavily than our competitors in neighbouring New England.

High taxes mean individuals have less money to spend or save. Companies, meanwhile, are voting with their feet by investing elsewhere. The result is fewer jobs and less opportunity for New Brunswick’s working families.

Our high provincial taxes are slowing economic growth and hurting investment. The province’s finance department expects income taxes paid by corporations will be $30-million lower than anticipated in the 2015 budget. That’s a 12 per cent drop. Similarly, HST revenue is also projected to be down by over $50-million or 4.2 per cent less in 2015. This is evidence of a deteriorating N.B. economy.

After the drum beat of tax increases we’ve experienced over the past few years it is apparent that New Brunswick can only eliminate its deficit, and return the province on a sound fiscal footing, by tackling government expenditures.

The provincial Liberals inherited a $389-million deficit from the previous Progressive Conservative government in 2014. And that PC government, under then-premier David Alward, was handed a $617-million deficit by Shawn Graham’s Liberals in 2010. The inability to control spending is a bipartisan problem.

The accompanying table shows how N.B. spending has gone up since 2005. Spending actually fell in two fiscal years: by two per cent in 2011, which was Mr. Alward’s first budget, and again by one per cent in Premier Brian Gallant’s inaugural 2015 budget. But that restraint was more than undone in subsequent budgets. 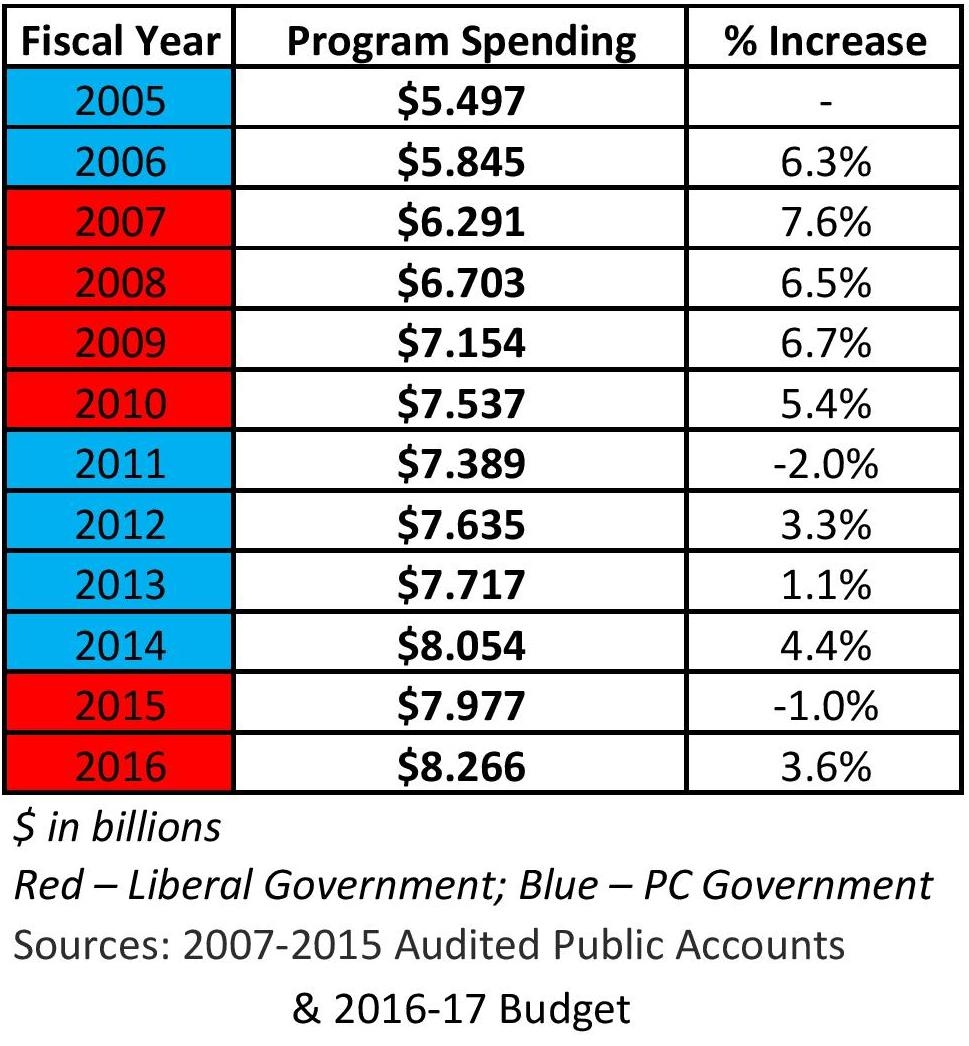 The Alward government’s second budget ratcheted up spending by 3.3 per cent. They got the budget back under control in 2013 when it grew a modest 1.1 per cent. Yet, it shot up 4.4 per cent in 2014 – a shared Alward/Gallant fiscal year after the September election.

The Gallant government – after reducing expenditures in 2015 – will increase spending this year by 3.6 per cent. That’s more than double the growth in population and inflation. As a result of this fiscal expansion, New Brunswick’s spending will hit a new record high of $8.3-billion.

Spending in New Brunswick has grown by a staggering 50 per cent since 2005. Very few taxpayers will agree we are receiving better government services for the added costs and higher taxes. Instead, we are carrying a larger government – our provincial bureaucracy is costlier and larger than the Canadian average.

So what can be done to turn things around? At an absolute minimum, New Brunswick should control its annual spending so it grows at a much more modest, and lower, rate. This is what countless households and businesses do every year to make ends meet.

Had the province moderated its spending increase to two per cent a year since 2005 – instead of the actual 3.8 per cent average annual boost – the government would today be running a $1-billion surplus. That surplus would mean the recent HST increase along with many other tax increases would not have been necessary.

Premier Gallant should commit his government to a one per cent increase to program spending. This would largely offset inflation and put downward pressure on the province’s spending arc. This limit should be set in law to ensure bipartisan support.