An open letter to our four premiers

An open letter to our four premiers

By John Risley (AIMS Chairman of the Board) 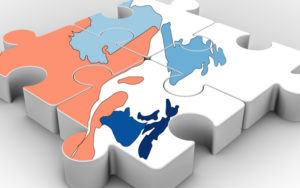 The purpose of this letter is not to be critical. Rather it is to encourage more aggressive action in bringing our Atlantic region into a more collaborative framework. The goal would be to reduce the cost of providing those services for which you have responsibility and to better prepare us for the dramatic changes which global economic forces are about to impose.

As the saying goes, timing is everything and the fact you are all of the same political persuasion, seem to get along well together, and collectively enjoy a good relationship with Ottawa, suggests the opportunity is just too good to miss. Again, this is not to diminish anything you have done with this agenda to date, but to request that you expand on the scope of this opportunity.

For instance, a small but significant initiative could be the consolidation of the purchasing function for all four liquor boards (or better yet, the whole liquor business). Do consumers really care whether they buy their wine, beer or spirits from the Nova Scotia Liquor Commission or the Atlantic Commission? This would be a definite money saver for all as well as tangible evidence of the political will to do more. It would demonstrate to the public at large, in the most positive possible way, the benefits of regional collaboration.

Next steps might range from consolidating the engineering functions or services of the four transportation departments through to identifying a common strategy for distance health care, tele-medicine and other related mechanisms for providing medical services to rural communities.

Another might be the development of a common strategy around cannabis production and distribution. Someone like Dominic Barton would be an incredibly valuable resource whose non-partisan advice could be helpful in flushing out more such ideas and how to execute them. (Barton, FYI, is the global managing partner emeritus of McKinsey. Based in London, his particular expertise is the future of capitalism and the role of business leadership in creating longterm social and economic value.)

On the growth agenda, let’s develop a common policy to allow fracking. Doing so as a collective will assist each of you individually; we have to tap our local resources rather than import them, and do so in an environmentally responsible way. Although this is more an issue for some provinces than others, we should have a regional set of rules and a single regulatory agency to oversee oil and gas activity. Such initiatives would send an important message to business that while we may be four separate provinces politically, we are acting in an environment of cooperation and cost reduction.

Why is this so important when we are able to identify initiatives already taken by the co-operation arising out of the Council of Atlantic Premiers? Because incremental progress is not good enough. We don’t have the luxury of time if we really want to be a magnet for young entrepreneurial talent, if we want to bring those Atlantic Canadians home who have left in search of greener pastures, if we really do believe we can be globally competitive in a variety of sectors and attract the sort of immigrant talent vital to restoring our alarming demographic trends. It’s all about scale and understanding the needs of a modern economy and appreciating that the fragmented approach to delivering common services across our region is just ridiculously and unnecessarily expensive. Think of the respect we would earn from the rest of the country should we act in such a collaborative and co-operative manner and think of the authority and leverage we might command when dealing with the Feds.

We need bold leadership, not small town politics. And I know you all well enough to be highly confident you can provide such leadership. This will take trust in each other and a visionary communication strategy. And it should, and I’m confident it would be, the responsibility of business and community leaders to support you all the way.