No doubt some bureaucrats are trying to bring Trump down. Why would that surprise you?

No doubt some bureaucrats are trying to bring Trump down. Why would that surprise you? 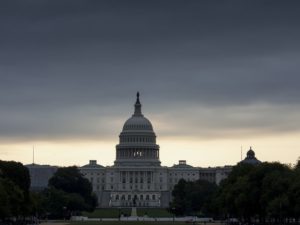 There’s no doubt some public employees are trying to bring Trump down. But this shouldn’t surprise anyone.

We live under the perception — or shall we say illusion — that civil servants are altruistic and loyally serve whichever party is in power, while actors in the private sector live by crasser ambitions of profit and power. We were disabused of that naivete when economist James Buchanan won a Nobel Prize in 1986 for an idea called “public choice theory” that showed public servants live by the same forces as everyone else.

Some have turned this around, blaming Buchanan himself for instigating a deep distrust of the state, leading to a right-wing attack on government. That’s the supposition of a new book by historian Nancy Maclean, Democracy in Chains, that claims public choice theory has lead to the likes of the billionaire Koch Brothers who support conservative causes, given their animus against big government. Buchanan was hardly a hater of government; he supported a 100 per cent tax on inheritances.

Keynesian economics showed that markets are prone to manipulation and failure, requiring government intervention to protect consumers. We now know government policies aren’t infallible. Once we grasp the significance of Buchanan’s insight, it makes clear much of bureaucratic behaviour and the political biases of government workers. Many government departments and programs exist long after the problems they were established to resolve have disappeared.

We intuitively understand that people do what they can to protect their jobs; civil servants are no different. Many state employees belong to the upper middle-class with higher than average levels of income. Financial Post columnist Lawrence Solomon recently reported that government workers on average earn 20 to 25 per cent more pay than their counterparts in the private sector. Federal workers do even better, earning 33 per cent more.

It doesn’t end just with higher incomes. Civil servants tend to belong to an elite class with all attending privileges. They have more education than the average adult with one or more degrees and in most cases are married to others with similar levels of education and jobs. Such people tend to live in neighbourhoods with other professionals, shop in the same stores, drink their coffees at Starbucks, bike and barge through Europe and send their kids to the same schools. More importantly, they have job security most Canadians can only dream of, security paid for by those who don’t have it.

And they work to protect these benefits.

We know from studies that civil servants, whether federal or provincial, vote at higher levels than their counterparts in the private sector and tend to hold more liberal and left-leaning views and work and vote for parties that support those views.

In the last federal election, state workers were hardly indifferent to the outcome of the election knowing that they would get a better deal from Liberal governments than from Conservative ones. Just ask the teachers unions in Ontario under Mike Harris.

We don’t have a Deep State or cabal working to overthrow our governments in Canada. I’m not so sure in places like Turkey, Egypt, Saudi Arabia or any other nation without a free press. In Russia and Cuba, they’ve no need for a Deep State because it’s right out in the open.

But let’s not pretend that we have an impartial civil service with selfless motives. Under Harper’s government, scientists were forceful in denouncing how they were kept under the thump of a tyrannical regime. They are quiet now even though nothing in their work has changed. External Affairs employees could hardly contain their joy after Trudeau’s victory in 2015.

Our government workers are probably better than most, but it’s always wise to keep an eye on the behaviour and motives of those serving their country.

Patrick Luciani is a senior fellow with the Atlantic Institute for Market Studies.