In his Telegraph-Journal column, AIMS Vice-President of Research John Williamson criticizes the New Brunswick government for its takeover of the Naval Centre is Bas-Caraquet, which he characterizes as taking on “a sinking ship.” This is not a needed infrastructure plan, but a $38-million Fredericton bailout that is destined to fail. Read this article on the Telegraph-Journal website. 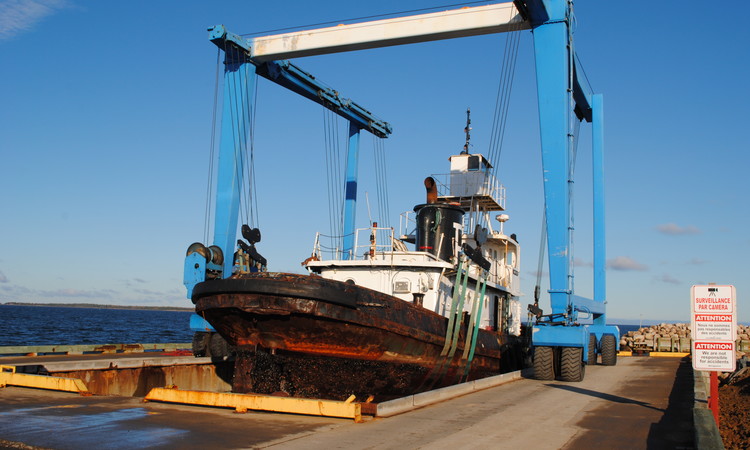 As details over the bailout of the New Brunswick Naval Centre in Bas-Caraquet surface many wonder where the provincial government’s financial involvement ends and the shipyard’s begins. Let’s not pretend, as Regional Development Minister Victor Boudreau would like, that this “investment” is all about infrastructure. Whether Ottawa agrees to help or not, we are about to set sail on another costly, made in New Brunswick, financial flop.

One might have believed this was a legitimate capital investment a year ago when Premier Brian Gallant announced a partnership to upgrade and construct new buildings at the Naval Centre for $10-million. Local proponents and the province would each kick in $4-million with the remaining $2-million coming from Ottawa. But the province hit stormy waters when the Gallant cabinet failed to adequately scrutinize the details. The project was called off when the Naval Centre couldn’t secure its financing, but not before the province had spent $1.5-million.

To get things moving again, the New Brunswick government decided earlier this month to buy the shipyard facility for a dollar. Public servants will take control of the operations and provincial taxpayers will cover the shipyard’s outstanding debts. At least 72 companies are owed money and those bills could run as high as $4-million.

Last week, Minister Boudreau told reporters that the government owning a shipyard is not unusual. Yet, the president of the Shipbuilding Association of Canada couldn’t name a shipyard owned by a government anywhere in Canada or the United States. According to Peter Cairns, “If the government is stepping in, there is a pretty clear indication that that shipyard was in danger.” The province, in other words, is taking command of a sinking ship.

To keep the money-losing Naval Centre afloat the province has decided it will begin by building a larger money-losing shipyard. In fact, it plans to spend an eye watering $38-million. That’s a far cry from New Brunswick’s original $4-million commitment. The cost to complete the original work has risen to around $15-million. Another $10-million will go to upgrade commercial docks owned by the province and a new dry-dock will cost $13-million. The province will ask Ottawa for help to cover these costs. Lost in this rising sea of red ink are any partners willing to ante up capital without some guarantee taxpayers will cover losses.

The Naval Centre’s anchor tenant Groupe Océan isn’t interested in an equity position and will only take on renovation projects. But when the Quebec-based firm didn’t receive payment for work last year, it slapped a lien for almost $717,000 on the shipyard. Soon after this “key player” ratcheted up the political pressure by laying off all 28 of its employees at the site. It was a mutiny with taxpayers walking the plank.

The province insists that’s all water under the bridge since the company will build a floating dry-dock once the upgrades are finished. Again, Groupe Océan has a pre-approved lifeboat seat funded by taxpayers: Opportunities New Brunswick will give the company $3.8-million if it creates 77 jobs. That’s over $49,000 per job.

Writing in the Telegraph Journal on Friday, Minister Boudreau tried to keep this project from crashing into the shoal. That he chose to disparage the Port of Saint John’s financial capabilities and compare its operations to the Naval Centre’s money-losing business signalled how far the government will go to muddy the water.

First, he assured taxpayers the province had done its homework and has a sound business plan for the Naval Centre with strict conditions. But those conditions amount to little more than an expectation that the federal government help with an unspecified amount of money. A trip to Ottawa with cap in hand isn’t a business plan.

Mr. Boudreau’s second objective is to normalize the shipyard bailout by linking it to routine projects voters expect, like road work and government support for public infrastructure at seaports and airports. “The federal government used to own every airport and seaport in Canada. Today, many are managed by not-for-profit agencies, but for the most part, these ports continue to receive their infrastructure funding from governments,” he wrote.

Ottawa’s ownership of airports and seaports ended when policymakers realized the federal government did a lousy job maintaining them. It is hardly an encouraging sign our province is jumping into the shipyard business when Ottawa – with vastly greater spending powers – won’t touch it with a barge pole.

What’s more, most ports – be it marine or air – aren’t entirely at the mercy of Ottawa for funding but instead receive revenues from users. In that sense, these assets have something the New Brunswick Naval Centre does not – a customer base large enough to generate revenues to contribute to infrastructure upgrades.

This brings us to the Port of Saint John. Minister Boudreau and Minister Don Arseneault have each asserted the $205-million port expansion in southern New Brunswick has no outside investment. None, zero – just like the northern shipyard. This is not accurate.

Port Saint John CEO Jim Quinn told the CBC on Jan. 14, 2015, the facility has undergone “unprecedented” business growth and is ready to contribute a third of the total cost, which amounts to $68.3-million. The port will – on the strength of its business – match what Ottawa and the province will each spend. If the Saint John Port cannot fulfill its end of the bargain it will not receive government assistance.

One port has visible operations, it pays its bills, and has the ability to invest in partnership with government. Another port is on life support, cannot pay its bills and is unable to raise capital to grow. You don’t need to be a financial expert to spot the difference.

A pattern has emerged that began when Minister Boudreau approved the Atcon deal, another economic development boondoggle that cost New Brunswick taxpayers $70-million. That these types of hope-for-the-best investments continue to be approved points to a government unable to learn from mistakes, which is the absolute bare minimum we expect from elected officials when tax dollars are wasted.

The government believes it can successfully run a shipyard business in northern New Brunswick. On what basis do they hold this position?