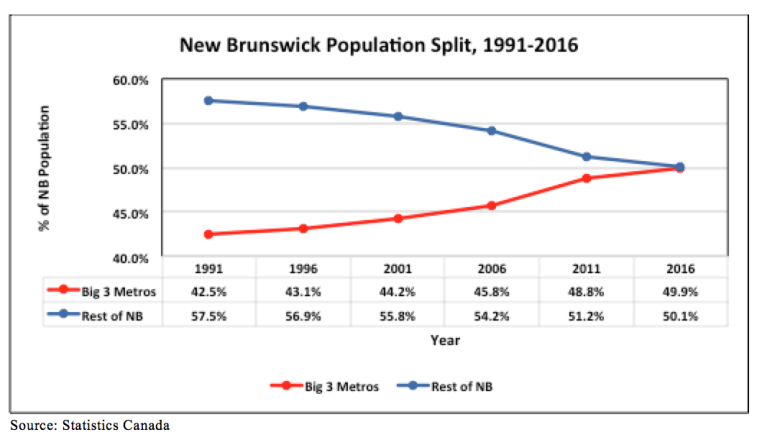 New Brunswick is often thought of as a rural place, aided by the absence of a single large urban centre. This sets New Brunswick apart from the other three Atlantic provinces, all with one dominant city.

Figures from the 2016 census suggest things may be changing. New Brunswick’s urbanization should force a reconsideration of its rural self-image. It is becoming a majority urban place, with implications for thinking about economic development efforts.

The three metropolitan areas in New Brunswick are Moncton, Saint John, Fredericton and their respective suburban and rural hinterland — including people who may live in rural surroundings yet whose lives are very much tied to an urban centre. In 2016, these centres were home to 49.9 percent of the population, just shy of half. This compares to 42.5 percent in 1991.

When these three urban centres are taken together, they actually make New Brunswick the Atlantic province with the highest share of population in large urban centres. Metro St. John’s is home to 39.6 percent of Newfoundland and Labrador’s population, while 43.7 percent of Nova Scotians live in the Halifax Regional Municipality. Metro Charlottetown, meanwhile, is home to 48.5 percent of P.E.I.’s population

New Brunswickers are increasingly moving to the big three urban areas, reflecting available job opportunities and greater convenience. Policy makers should not be distressed by this trend, for it reflects larger economic and historical forces that tend towards greater urbanization.

What should strike them, however, is that urbanization proceeds despite costly, and ultimately failed, efforts to artificially prop up rural New Brunswick and its traditional economic activities.

New Brunswick’s Regional Development Corporation spent over $400 million in the last ten budgets on development initiatives, including various failed corporate welfare schemes that were justified as boosting hard-hit communities. And yet population decline outside of the province’s big three centres continues. This should force us to rethink how we nurture growth in rural areas. Here are a few examples:

First, we must not view economic prosperity and growth in urban centres as restricted to said areas. Vibrant cities nurture demand for vibrant rural hinterlands that can provide desired products and services.

Second, rural communities should be given greater control over their tax and spending powers. The Local Service District model of local governance that currently applies to over one-third of New Brunswickers is inefficient and stifles local initiative and experimentation in a host of areas, all ultimately tied to economic development. Rural areas must be given direct municipal control over their local matters.

Third, the myriad forms of regional development and corporate welfare initiatives should cease, to be replaced by a broad tax and regulatory environment that encourages entrepreneurship and investment, such as eliminating the small business tax. Efforts to keep traditional industries alive should be scrapped. Just because a town has always depended on a given industry does not mean it must always do so in the future.

Instead, government should let local and outside entrepreneurs and investors have the freedom to develop new economic drivers for rural areas, ones based on market needs, rather than political interference.

In sum, the provincial government could abandon statist efforts to prop-up declining industries and instead create a better, and fairer environment for businesses to emerge and grow naturally. One can then expect prosperity and growth to flourish in both urban and rural areas alike.

–
Patrick Webber is a Research Associate at the Atlantic Institute for Market Studies (AIMS.ca).