AIMS Vice President of Research John Williamson responds to New Brunswick’s Treasury Board Minister Roger Melanson about spending and deficits: “So long as New Brunswick continues to tax and spend the government will not balance its budget,” he writes. “That is not partisanship or dogma – it’s a simple calculation.” Read this article on the Telegraph-Journal website. 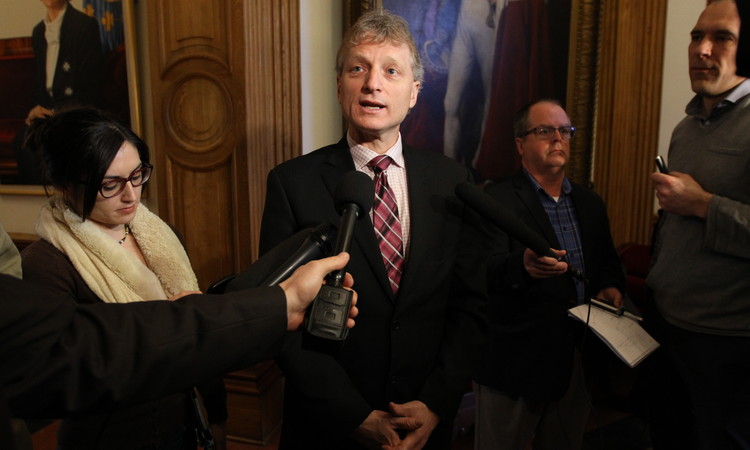 Treasury Board Minister Roger Melanson has a tough job. He is the province’s work horse on tax and spending issues. But his budget policies are not creating the economic growth New Brunswick needs.

Mr. Melanson was finance minister until early June. His budgets increased taxes on personal and corporate income. More recently, the government hiked the HST by two points to 15 per cent. Total government spending meanwhile will hit $8.97-billion in 2016. That’s a new record high.

The province’s policy of high taxes to pay for more spending is not working. Just look around. New jobs aren’t being created and the government’s policy of subsidizing some companies that add workers isn’t sustainable. Subsidized jobs typically disappear when the grant ends. Nor is this policy smart economically since the cost of those corporate subsidies is paid by higher overall taxes. This is a drag on business expansion and job formation. Economists say growth in New Brunswick is slowing. The Conference Board of Canada predicts the economy will actually shrink in 2016. Our labour force is shrinking as the population ages and workers go elsewhere to seek better opportunities.

Taxes are so high now that families and businesses are spending and investing less. The proof comes from the province’s own budget numbers. The 2016 Budget lowered the amount of tax revenue from two sources that the finance department had said the province would collect in 2015. Taxes paid by corporations in 2015 will be $30-million less than anticipated. Similarly, HST revenue will be down $50-million, a 4.2 per cent decline. These numbers indicate slower business activity and less consumer spending in our province. Complaints about budget policy are usually heard from outside the government. But not always. David Campbell – the senior advisor to Premier Brian Gallant’s Jobs Board – recently broadsided the government in a commentary entitled, “New Brunswick’s $250,000 Problem.” According to Mr. Campbell, our province doesn’t have enough high-income earners.

Slow economic growth and more unemployment are triggered by heavy personal and business tax rates. New Brunswick’s personal income tax rates – up and down the economic ladder – are too high. We are nearly tied with Nova Scotia as having the second highest top tax rate in North America. (The highest tax jurisdiction is, of course, Quebec.) Our province also has one of the highest corporate tax rates in Canada. This weakens incentives for large companies and the people that manage them to remain or locate here.

Mr. Melanson says none of this matters. He does not believe the government’s high tax agenda puts the province at a competitive disadvantage, despite mounting evidence of a worsening economy. “East of Ontario, everyone is at the same level or just about,” he said about taxes last week. “We are competitive in corporate taxes. The level of income tax for high-income earners also is competitive compared to the other Atlantic provinces.” Minister Melanson isn’t troubled by the negative impact of high taxes.

Mr. Campbell, however, is candid in his dissent. He understands having fewer high-income taxpayers has consequences. He says it means less tax revenue for New Brunswick and less overall economic activity. And even worse for families, New Brunswick’s disappearing top earners, he explains, “pushes the tax burden down the income pyramid.” Translation: having fewer high-income earners means middle, modest and even low-income taxpayers pay more tax. This is precisely what has happened as a result of New Brunswick’s budget policies.

There is more. And it isn’t good for taxpayers or truth in budgeting.

Mr. Melanson has dismissed the suggestion the government is taxing us more to spend more. He told CBC (Moncton) last Tuesday that the government is instead taking a “balanced approach” to deficit reduction with spending cuts equaling tax hikes.

He said 50 per cent of the budget solution comes from finding government efficiencies that total $296-million over the next five years. The other piece, “about 50 per cent of the solution,” comes from $293-million in new revenues from the HST. A balanced 50-50 approach he claims. Except the government is pulling a fast one. New Brunswick will collect about $300-million each year from its two-point HST increase. That’s $1.5-billion over five years. The as-yet-realized expenditures savings of $296-million amount to just $60-million a year, on average.

For every $1 in spending reductions New Brunswick taxpayers will pay $5 more in HST. This 5-to-1 ratio isn’t close to being a balanced plan. And it would be even more lopsided if we include the additional tax revenues coming from higher income taxes, higher gas and cigarette taxes, and the added fees for government services.

So long as New Brunswick continues to tax and spend the government will not balance its budget. That is not partisanship or dogma – it’s a simple calculation. Or as Paul Martin put it in Parliament back in 1995, “The debt and deficit are not inventions of ideology. They are facts of arithmetic.” Minister Melanson needs a new calculator.