All you can eat?

All you can eat? 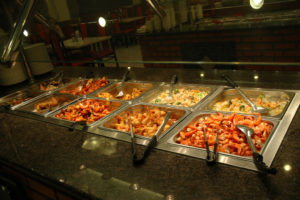 Within a year, single-use plastics and excess packaging have become public enemy number 1. Everyone is talking about how our lives are overrun by too much plastic. Just recently, a Greenpeace-led audit looked at waterways waste and companies involved. Much of the plastic trash cleaned up from Canadian shorelines this Fall was traceable to five companies: Nestlé, Tim Hortons, PepsiCo, the Coca-Cola Company and McDonald’s. All these companies are part of the food industry, hardly surprising.

As consumers look for convenience, and more portable food solutions, this problem will not go away anytime soon. In fact, it could get worse if nothing is done. The number of meals in Canada consumed outside the home is only increasing. Canadian households spend roughly 35% of their food budget outside a grocery store, and that percentage is only increasing every year. People walking around with plastic containers and bags, wrappers, cups, will grossly increase, and the food service, retail and processing sectors are all fully aware of this environmental conundrum.

Demographics are also complicating things. As more people are living alone, single-servings will become more popular. That too requires more packaging. But what is brutally unclear for companies is how to deal with it. But making the issue of plastic use a political one is creating some movement, everywhere around the world.

In the food industry, conversation on green supply chains focus on compostable and even edible solutions. Plenty of technologies exist. On the compostable front, we come a long way in just a few years. In 2010, PepsiCo Canada came out with the first compostable bag of chips, for its SunChips product. This new package was to completely break down into compost in a hot, active compost pile in approximately 14 weeks. Some tests concluded that it did not. But what really attracted the attention of consumers to this ne novelty was the noise. An influential social media campaign led to the compostable SunChips’ bag downfall. The company pull it from the market less than a year after its introduction. It was just a disaster.

Since then, cities which play a key role in completing any food products entire life cycle have been more reluctant to accept anything without proper due diligences. We are now seeing an increasing number of compostable packaging on the market, surely a step in the right direction. As cities are becoming incline to accept food packaging in green bins, retailers shouldn’t shy away from promoting these green solutions, even perhaps adopt new green packaging schemes for some of their private labelled products.

But edible packaging seems to also be gaining some currency all around the world. Imagine one day walking into a grocery store, and everything you see on store shelves can be eaten. Research has come a long way, but it has not been easy. The first generation of edible packaging were made from starch which often failed to keep food fresh. But the Unites States Department of Agriculture (USDA) has been working on a new generation of edible packaging which may get the attention of food industry pundits. Casein-based food packaging, made from milk proteins, isn’t just edible it’s also more efficient than other types of packaging as it keeps oxygen away from the food for an extended period. What even more interesting is that the edible fabric itself can be infused by vitamins and probiotics, to make the product more nutritious. This technology from the USDA should be ready in 2019. One other organic matter which is getting some attention is seaweed. We have wrapped sushi with seaweed for centuries, so it is only natural to extend the practice beyond Japanese delicacies. Costs and availability are still unclear.

Promising technologies, but no business model has yet been developed, and we still don’t know how the use of edible packaging will affect price points at retail. This is certainly of great concern to retailers and restaurants. Other issues have come up as well when considering edible packaging. One obvious one is the issue of taste and food safety. The concept of reducing plastic waste by eating more packaging is intriguing, but not every consumer would think of such a concept as appetizing. A case has to be made for consumers to eat their garbage away. Logistics are certainly an issue with edible packaging. Throughout the supply chain, temperatures tend to vary greatly which makes it challenging for any edible packaging to preserve the integrity of products which can travel thousands of kilometers around the world.

Start-ups looking at this issue are rampant though. According to Transparency Market Research (TMR), a global research firm, demand for edible packaging could increase on average by 6.9% yearly until 2024 and could become a market worth almost $2 billion worldwide. As consumers, we will be given an opportunity to save the planet as we eat our food, and packaging.

In the mean time, Greenpeace can continue to blame companies for the rubbish we find in oceans and waterways, but the people who are responsible for this mess is all of us. If we want more compostable or edible packages, we may be asked to pay more for our food, to pay for a so-called “planet premium”, once these new technologies come around. Regardless, it may be worth it.