Will Canada Ever Grow Up on Defence? The Peter Pan Syndrome

Will Canada Ever Grow Up on Defence? The Peter Pan Syndrome

The Peter Pan Syndrome: Will Canada
Ever Grow Up on Defence? 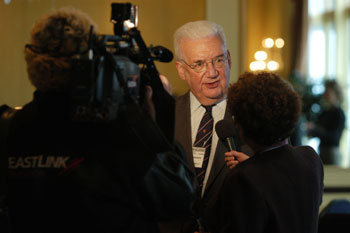 A talk by Jack Granatstein

Canada’s defence policy is the subject of increasingly intense scrutiny in a world in which security and military concerns are looming ever-larger. Few regions of the country will be as affected as Atlantic Canada by the outcome of this renewed interest in defence. Our historic and ongoing relationship to the military is intimate and inevitable. This is particularly the case for the Navy, still the largest employer in the region’s largest city. Changes in military policy have always had a disproportionate impact in this region and future changes, good or bad, can be expected to cause similar shockwaves throughout our economy. Both what those changes are likely to be, and what they should be are thus questions that should be of deep interest to all of us.

That is why on November 18, 2002, Jack Granatstein, noted author of the recently published Canada’s Army: Waging War and Keeping the Peace, historian, former Director and CEO of the Canadian War Museum in Ottawa and a regular commentator on the state of the Canadian military, was the next speaker in the Economic Leadership Speakers Series. His talk was a stimulating perspective on what needs to be done to sustain the military’s ability to meet domestic and international responsibilities and what meeting those demands will mean for Atlantic Canada and the country as a whole.

View selected photographs from this event.