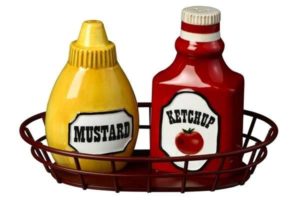 We are now officially at war with the United States – in a trade war that is. In response to U.S.-imposed tariffs on steel and aluminum, Canada intends to do the same on our side. Like any trade war, it could unfortunately escalate. Canada will unlawfully implement counter-measures which will take effect on July 1st, if the U.S does not end its steel and aluminum duties. It’s like Walmart going up against that cute little gift store we visit every so often. And just to be clear, Canada is not Walmart in this scenario. Interesting times.

The trade war appears to be moving into agrifood, one of the most sensitive economic sectors when it comes to trade. Of the 84 items mentioned on Canada’s “Table 2” list, 23 are food products. History has shown us that trade wars are not kind to consumers when agriculture and food products are targeted. Food inflation tends to skyrocket when barriers are erected. We import for over $25 billion worth of agrifood products from the U.S. Fruits, nuts, vegetables, beverages, and baked goods represent a big portion of what we buy from the Americans. Interestingly, none of the items are mentioned in Ottawa’s recently-issued notice of intent. In other words, it is highly unlikely these counter-measures will become a threat to Canada’s food security – something trade wars tend to do.

In fact, categories with lower sales volume are being targeted, and most of the food products on the list do have Canadian-based alternatives in the marketplace. Yogurt, ketchup, pizza, mustard, maple syrup, chocolate, jam, and whiskey are also made in Canada. Other categories, like prepared foods, mustard, soy sauce, or mayonnaise may be more problematic. As such, Canadians will likely see some American goods becoming more expensive, or perhaps some will be as expensive as many Canadian-produced products. This could be welcome news for some of our businesses. The “Buy Canadian” movement will certainly see this as a needed boost. The challenge, of course, is that many of the U.S. products are cheaper – much cheaper – even when our dollar was worth below 75 cents against the U.S. greenback. Price points will likely go up and cheaper options could be limited.

But food retail prices have barely moved since January. Food inflation is at 0.1%. Prices have room to increase, allowing grocers to breathe, and increase margins. If tariffs are implemented, grocers could see this as an opportunity to raise prices, regardless. If they opt to do this, it will be brilliantly subtle and consumers may not even notice the 3%-4% hike on prices of American-based food products.

Back in early 2017, Ottawa eliminated many tariffs on a long list of ingredients, including cereals and grains, fats and oils, fruits and vegetables, and food preparations. These measures allowed Canadian processors save more than $200 million a year and strengthen their competitiveness both at home and abroad. The list published does not suggest that Ottawa intends to reinstate these tariffs, sparing the processing industry. The notice of intent appears to be quite populist, targeting consumable food products many Canadians buy regularly but not frequently. In fact, the list seems to include either products we manufacture, or products we actually should be manufacturing more of, like soy sauce and mustard. In the case of mustard, few Canadians are aware that Canada is the largest exporter of mustard seed in the world. Most of it is sold to the U.S., and we buy it back in bottles, at twenty times the price. This could perhaps be the excuse we’ve been looking for in order to change this practice, but it is still too early to tell. So, in a sense, the list was cleverly put together.

Ottawa has decided to retaliate by using an age-old scheme in trade wars: tariff barriers on food. Throughout history, countries protecting their market by issuing duties on food imports have seen how measures can be dangerously short-sighted and can often backfire, usually hurting those who are supposedly being protected. But Ottawa seems to be using a different playbook with Washington. Ottawa seems to want to send a clear message to Washington, while at the same time offering the food industry an opportunity to grow. In a sense, its notice of intent delicately strikes a balance between diplomatic resilience and economic inducement for our agrifood economy. Consequently, it may not be such a bad thing if mustard and mayonnaise get more expensive.

But based on pure economics, Canada cannot win against the United States – not even close. The “we’ll show them” attitude can only go so far and doesn’t really stand a chance. Some argue that the Trudeau government is playing a game of chess with Washington. Objectively, the game looks more like Russian roulette than anything else. Many things could happen before July 1stthough. We should all hope Canada has a long-term plan if this trade war lasts a while, as it likely will.