Why does New England, the land of Bernie Sanders, live with lower taxes than Atlantic Canada?

Why does New England, the land of Bernie Sanders, live with lower taxes than Atlantic Canada? 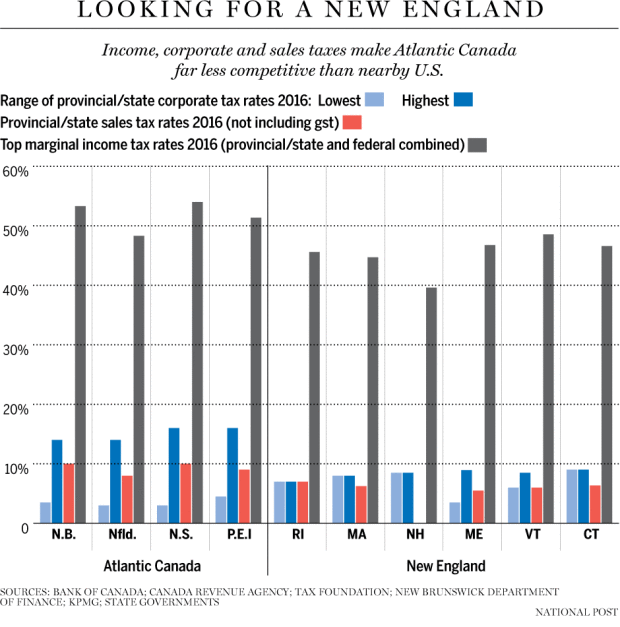 In a world where even Alberta tax levels can no longer keep billionaires from leaving — with oil magnate Murray Edwards decamping to the U.K. after recent federal and provincial tax hikes — shed a tear for Atlantic Canada’s continually overtaxed residents. For decades, those families, businesses and consumers have faced some of the highest tax rates in North America.

Canadians may already know that Atlantic Canadians (along with Quebecers) pay the highest personal provincial taxes in this country. But another useful comparison is right next-door: In their competition for regional investment, there is a staggering difference between taxes in Atlantic Canada and in the U.S. New England states.

Start with provincial and state personal income tax rates. The lowest rates in Atlantic Canada range between 7.7 per cent (Newfoundland and Labrador) to 9.8 per cent (Prince Edward Island). These are the income tax rates paid by modest income earners.

In contrast, among the six New England states, the lowest or “first bracket” personal income tax rates range from zero in New Hampshire, which has no state tax on earned personal income, to a high of 6.5 per cent in Maine.

Now consider the highest provincial and state income tax rates, applied to top income earners. For Atlantic Canada, in 2015, the rates ranged from 14.3 per cent (Newfoundland and Labrador) to 25.75 per cent (New Brunswick). In 2016, New Brunswick trimmed that top rate, making Nova Scotia’s the highest marginal tax rate for provinces/states in the region, at 21 per cent.

The Canadian disadvantage is just as bad when it comes to sales taxes. As of 2016, sales taxes in the Atlantic provinces ranged from eight to 10 per cent (after removing the GST portion from the HST). But in New England, the state sales tax rates start at zero — in New Hampshire, of course — and top out at seven per cent in Rhode Island.

At least on business taxes, the record is somewhat better since the provinces offer lower rates for small businesses that range from 3.0 to 4.5 per cent. New England’s small-business tax rates range from 3.5 per cent to 9.0 per cent. Yet, once a small business grows, it’s the corporate tax rates that matter. And in New England states, those are between seven and nine per cent — far lower than the 12 to 16 per cent corporate-tax rates that range across Atlantic Canada.

One might try and argue that Atlantic Canadians receive much better government services for all their higher provincial taxes. But that argument fails to explain why taxes in Atlantic Canada are higher than those in the rest of Canada, where similar social programs exist.

Besides, that tired excuse for high Atlantic taxes on individuals, consumers and businesses is also undermined by the example of Vermont. That’s the home state of America’s most famous avowed socialist politician, Bernie Sanders.

Compare that to Atlantic Canada’s range this year: 7.7 per cent at the lowest incomes in Newfoundland, to Nova Scotia’s high-income rate of 21 per cent, both mentioned above. But that top rate of 21 per cent isn’t just more than double Vermont’s, it also kicks in far earlier: at $150,000 in income. Meanwhile, in Sanders’s home state, the six per cent state sales tax and (highest) 8.5 per cent corporate tax rate are also both much lower than the equivalent taxes in the four Atlantic provinces.

Those provinces have caught themselves in a tax trap: How can they lower their painfully high, uncompetitive rates beyond just cutting some government spending, which is only one necessary remedy?

One additional way would be to stop blocking resource development including, for example, exploration for onshore natural gas fracking, which both Nova Scotia and New Brunswick have obstructed with moratoriums. Those extra resource revenues could be used to help reduce business and personal taxes. That may be a partial step to relieving Atlantic Canadians of their high tax burdens and a start to making the region more competitive with its American neighbours.