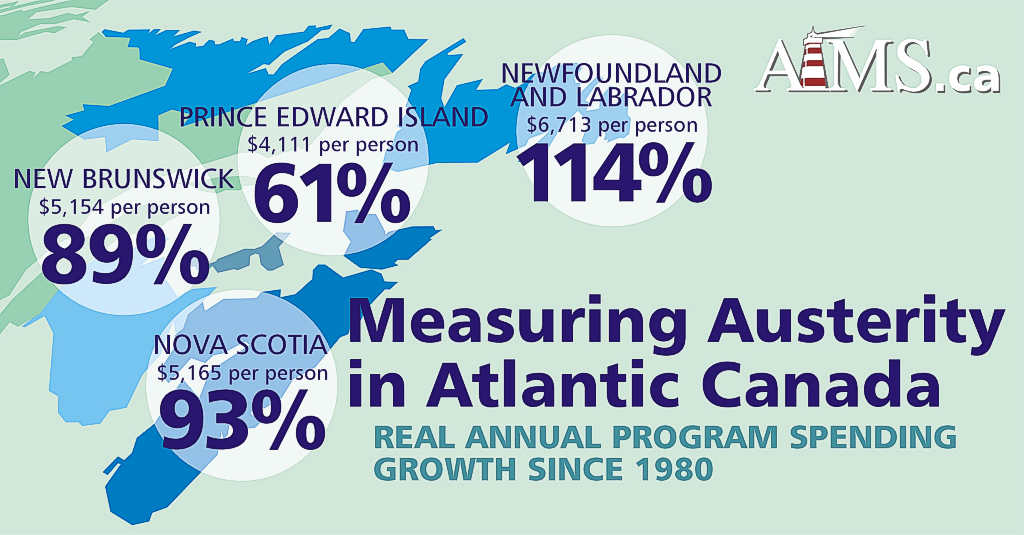 “Austerity” has become a popular buzzword, gaining traction in the aftermath of the 2008 Great Recession and subsequent financial troubles in much of Europe. It has also found its way into New Brunswick’s public discourse, having been adopted by critics of curtailing government spending.

But do the budgetary habits of any New Brunswick government over the last three decades, including the current one, resemble these European cases?

Austerity is often used to emotively portray cruel and callous fiscal measures, heartless cuts and deliberate neglect by government. But to meet an objective definition of austerity, there must be an actual reduction of spending.

My recently published paper “Measuring Austerity in Atlantic Canada” provides a historical perspective on austerity rhetoric and policies. The numbers show that government spending in all four Atlantic provinces, including New Brunswick, has ballooned over the last generation.

The recent bout of austerity measures in the European “PIGS” nations – Portugal, Ireland, Greece and Spain – all saw average annual spending decreases of 10 per cent. Total spending decreased by as much as a quarter in as few as two fiscal years. This is the experience that brought the term austerity into vogue.

How does New Brunswick compare? Between 2008-09 and 2016-17, program spending has increased by 9.7 per cent. This figure accounts for inflation and subtracts the annual cost of debt servicing, which currently sits at $700 million and consumes 7.8 per cent of all spending.

This increase came after a period of even greater spending growth in the province, one that pushed the government’s spending habits to unsustainable levels.

In 1980-81, the New Brunswick government, then under Richard Hatfield, spent about $4.1 billion (in 2016 dollars) on programs, or $5,800 per New Brunswicker. By the time he left office in 1987, his government had increased real program spending by 25.1 per cent. The Frank McKenna government that followed Hatfield, often seen as a purveyor of restraint, did curb spending growth but ultimately still increased program expenses by 7.6 per cent by 1997. Per capita program spending increased by 4.1 per cent.

Soon after McKenna’s departure, the spending taps were turned on full blast.

To maintain these levels of spending, New Brunswick’s government already levies the highest income tax rates in North America and now ties other Atlantic provinces for the highest sales tax rates in Canada. Such levels of taxation will result in an exodus of high-income earners and profitable businesses, undermining the very revenue source for ever-increasing spending.

New Brunswick’s net debt for 2016-17 sits at $13.46 billion, 68.8 per cent higher in real dollars than it was a decade ago. The province’s net debt-to-GDP ratio is now the third-highest in Canada, at 39.9 per cent, and is the fourth-highest in per capita terms.

To service this mounting debt, the government must take funds that could be devoted to public services or returned to the public in tax cuts. This cost is despite sustained low interest rates. It would be folly to assume that such fortune will continue indefinitely.

One need only look at the experience of the early 1980s to see what can happen. Interest rates surged in the first half of the decade, and with it New Brunswick’s debt servicing costs. In current dollars, the expense of debt servicing more than doubled from $373 million in 1980-81 to $758 million in 1985-86. By the mid-1990s, debt servicing was chewing up one out of every seven tax dollars.

New Brunswick’s leaders would be wise to consider the disastrous impact of a similar scenario. Simply put, we spend at an unsustainable level, one that demands rethinking about what government should do and how to lower costs. If such temperance measures are not adopted, the result will be genuine austerity.