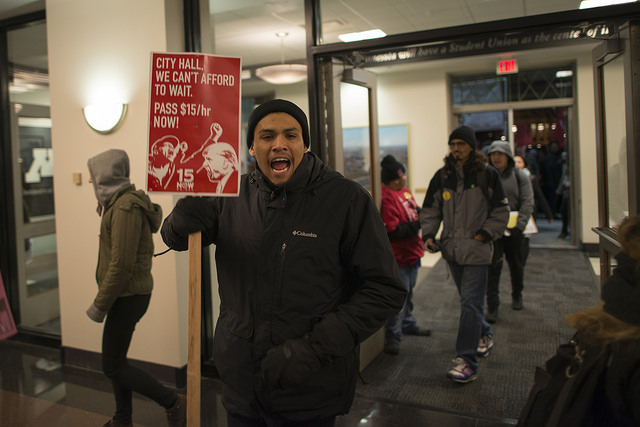 New Brunswick’s government has raised the minimum wage by 35 cents to $11.00 per hour, the 12th increase since 2007. This policy moves the wage floor to the highest level in three decades.

People tend to applaud minimum wage increases, but they likely harm those that policy makers want to help.

A wage is not a reward for moral character or a form of charity, but a reflection of the market value of the task, the skill level involved and the ease or difficulty with which the worker can be replaced. If a wage is greater than the task’s economic worth, the worker is priced out.

This elementary economic fact explains how significant increases in the minimum wage can lead to layoffs and reduced hours, or employers electing not to hire new employees.

Concerns about the cost of living facing low-income earners are valid. But the best way to address these concerns is decrease the cost of living, effectively increasing the purchasing power of an existing wage. Here are some ways to achieve this:

Protectionism increases the price of goods for all consumers, hitting low-income consumers hardest. Free trade, where goods are available without any artificial price increases, significantly reduces costs. The benefits of freer trade are already evident for low-income earners. According to the Peterson Institute for International Economics, lower taxes on imports from trade deals save the average U.S. household about $10,000 a year. A joint study at UCLA and Columbia University found that “ending free trade agreements, on average, would cause the poorest 10 percent of consumers across 40 countries to lose 63 percent of their purchasing power.”

Ottawa should phase out the national system that artificially increases the price of many food staples, namely dairy products, eggs and poultry. A 2015 study in Canadian Public Policy found that the average Canadian family with children spends over $1,200 a year on groceries subject to supply management, which means the system “imposes an implicit tax on the poorest households with children ranging from $466 to $592 per year.”

In addition to income tax deductions, workers make contributions to E.I. and CPP from each paycheque. Unlike income taxes, however, low-income earners cannot reacquire these deductions in the form of credits. New Brunswickers working full-time at minimum wage will pay nearly $1,400 a year in these payroll taxes, or six percent of their income. Reducing these costs will not only stretch the value of one’s wage but also make it easier for businesses to hire more people.

Those who wish to raise the minimum wage have the best of intentions – a desire to ease financial burdens of low earners. However, this remedy amounts to a cure worse than the disease. It is better to focus on making life more affordable and giving low-income workers more of their earnings and boosting their purchasing power, rather than squeezing more from employers.