Canada: A country worth fighting for

Canada: A country worth fighting for

By JOHN RISLEY (AIMS Chair of Board) 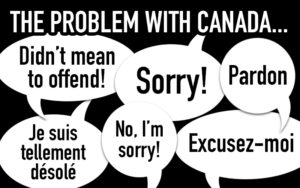 IN OUR ENTHUSIASM to continue to make Canada distinct, uniquely caring, openminded, polite and any other adjective you might like to use to describe not so much what we have been but what we seemingly want to aspire to become… we run the risk of being ungovernable. That’s a pretty profound statement, and it’s meant to be.

We have in British Columbia a government that is intent upon preserving its place in office by abdicating any sense of responsibility in its duty to the majority of the electorate, a government which is apparently content to thwart the federal will and national interests. We have in Kinder Morgan a private company unwilling to take on the agony and risks of endless court challenges. What’s the underlying problem? It is that the vocal minority, on any day, on any issue, captures the media’s attention and the pre-occupation of governments at all levels. Money pours into these causes célèbres from within and outside our borders to fund court challenges, media campaigns, the distribution of misinformation and overt manipulation of the truth. And we accept it.

In our race to reconciliation with our Indigenous communities, we fail to grapple with the real issues, creating completely ridiculous (if not just unrealistic) expectations and increasing the tensions which reconciliation is meant to diffuse. Few nonnative Canadians understand the responsibility to engage in meaningful ways with our First Nations friends. Meanwhile, many in the Indigenous population fail to understand their responsibility to try and speak with one voice rather than 600-plus (often with competing agendas). The duty to consult does not convey with it the right to veto but rather the duty to engage in a careful weighing of benefits and risks and a keen sense of the public good.

As I write this, the Italian government (or lack thereof) is in crisis. The fringe parties who control the most seats are trying to install a policy agenda and the finance minister—who advocates ignoring their fiscal constraints— wants to borrow money to increase spending while at the same time asking the European Central Bank to forgive some $250 billion of what they now owe. Bizarre, but the recipients of a new guaranteed minimum income, those who would receive increased pension benefits, they love it. Who cares where the money comes from and who cares if it’s never paid back? This is the natural conclusion of populism. Obviously, none of this works but the cost of going down the road to discover this truth is hugely expensive.

Canada can learn from their mistakes. Specifically, there is danger in continuing to do what Canadians (sigh) are inclined to do: appease the vocal minority and turn a blind eye to the consequences. If we continue to do that, anti-development forces and populism will steal the national agenda, undermining investment and economic activity.

There is so much we have to gain by embracing the opportunity to partner with our First Nations communities to unlock a responsible development agenda: meaningful jobs, new revenue sources, and capacity building. Extracting maximum economic benefit from our vast hydrocarbon assets is not a bad thing—it’s fantastic! It`s what will keep Newfoundland and Labrador out of bankruptcy, and the world will not burn a single extra gallon of gasoline. And doing so will generate huge tax revenues which can be used for the sorts of social programs we embrace.

My point is that we need to stop turning a blind eye. Engage. Put your foot down. Enough is enough. It was both brave and the right thing for the federal government to step into Kinder Morgan’s shoes to ensure the pipeline gets built. But this is not the way to carry out resource development in this country. We need to build worthy partnerships with our First Nations. We need to tolerate responsible opposition but not collapse in its face. We need to practice and preach responsible fiscal policy. We need to be willing to stand and fight for this special Canada, or it simply won’t happen.