In October 2012, Gerard Comeau left his home in Tracadie, New Brunswick, and drove to Quebec to buy alcohol.  Comeau, a retired power lineman, knew that he would be able to buy the same alcohol for less in Quebec. However, upon returning to New Brunswick, Comeau was stopped by the RCMP and charged a $292.50 fine.

By bringing cheaper alcohol back to New Brunswick, Comeau undermined the ANBL liquor monopoly in his home province, and violated an outdated interprovincial trade law. Comeau’s case has received considerable public commentary, and is now being considered by the Supreme Court of Canada.

Whatever the Supreme Court decides, one thing is clear: change is overdue for Atlantic Canadian provincial liquor monopolies. In our recently released study, published by the Atlantic Institute for Market Studies, we recommend taking steps toward implementing a free-market system for liquor retail, wholesale, and distribution.

The study’s valuation indicates the four Atlantic Canadian liquor corporations could fetch as much as $5-billion if sold on the open market. This number is the combined total of the four provincial monopolies, and demonstrates their immense value to provincial treasuries.

AIMS’ polling on the Comeau case shows that Atlantic Canadians are dissatisfied with the status quo, and are tired of the costly pricing imposed by provincial liquor monopolies. The study details problems with monopolies, such as inefficiency, higher prices, and lack of variety.  The system in place is anti-market and violates the spirit of free trade within Canada. 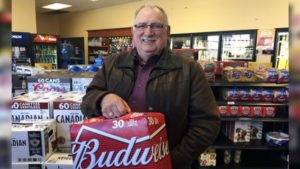 The four provincial crown corporations — the NSLC, ANBL, NLC, and PEILCC — have controlled almost all aspects of liquor retail, wholesale, and distribution in Atlantic Canada since prohibition ended, bringing in hundreds of millions of dollars to the provincial governments each year. This profit comes directly out of the pockets of consumers, who pay above-market prices.

Getting government hands out of retail liquor sales would be a good first step. For starters, it would open up opportunities for small businesses. No doubt many Atlantic Canadian entrepreneurs would jump at the opportunity to qualify for licensing as liquor retailers. All in all, getting government out of liquor retailing would mean new opportunities for local businesses, and consumers could buy cheaper, more varied products, at more stores, increasing convenience.

A divestment doesn’t have to come all at once. In the study, we recommend that Atlantic Canadian liquor corporations begin by selling their retail liquor store operations, and deal with divestment of the wholesale and distribution operations at a later date.

The divestment of retail liquor store operations is an approach that has been pursued elsewhere in Canada with success. The Albertan government conducted a divestment of their retail liquor store operations in 1993, and a quarter-century later, Albertans show no sign of wanting to turn back. The Albertan consumer is now able to buy a wider range of alcohol products (almost 22,000) at a larger number of locations (2,100) than ever before, with no detectable increase in alcohol-related social ills.

Emulating the Albertan model, which is also used in many US states, is a good first step. Throughout much of the USA, state-level governments are responsible for licensing producers, wholesalers, distributors, and retailers. This approach focuses on preserving public safety while simultaneously permitting a market system to thrive through the entire supply chain, all the way from producer to consumer.

Following this example would allow Atlantic Canadian governments to focus more effectively on their natural role as guardians of public safety. They could regulate and license liquor wholesalers, distributors, and retailers, instead of trying to be all of these things at once.  Doing so would provide much-needed business opportunities for Atlantic Canadian entrepreneurs and reduce costs for consumers like Comeau.

Change is overdue, and consumers deserve better. Other jurisdictions have shown us that different models can work. In many areas of public policy, Atlantic Canada is too satisfied with the status quo. It is time to take advantage of the opportunity presented by the Comeau case and achieve some progress.

Alex Whalen, JD is Operations Manager at the Atlantic Institute for Market Studies. Ian Madsen, CFA, is an independent financial analyst. They are co-authors of the latest AIMS study, “An Analysis and Valuation of Atlantic Canadian Liquor Monopolies”. Read more at AIMS.ca/liquorvaluation