There’s been a mild thaw in the war of words over Atlantica. 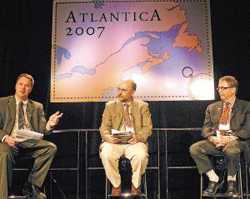 A vocal proponent and opponent of the trade bloc concept were able to reach some agreement on the benefits of increased trade for Atlantic Canada.

Both Scott Sinclair (centre), co-author of a report for the Canadian Centre for Policy Alternatives that criticizes Atlantica, and Charles Cirtwill (left), acting president of the Atlantic Institute for Market Studies, agreed increased international trade would benefit the economy of Atlantic Canada during an afternoon session at the 207 Atlantica conference in Halifax.

“Few Atlantic Canadians and I certainly would not argue against improving trade with our New England neighbours or cooperating as a region to meet mutual challenges such as a climate change,” said Sinclair.

But, he added, Canadian ports should not rely on cargo destined for the U.S. for their long-term viability, nor should expensive projects such as highway projects be built to support the flow of goods.

The Atlantic Provinces Chambers of Commerce should turn away from its focus on Atlantica, he said.

Atlantica refers to a trade zone encompassing the Atlantic provinces, the northeastern United States and parts of Ontario and Quebec.

The region stretches from St. John’s to Buffalo, N.Y.

It aims to restore the traditional north-south trade relationships between Atlantic Canada and the northeastern U.S. that were severed after Confederation.

Cirtwill and Sinclair have sparred over Atlantica on radio talk shows and in newspapers over the past four months.

“We all agree that we need public policies that make this region a desirable place to live, work and trade and invest,” said Sinclair. “Stepping back from Atlantica and the controversy it has provoked would allow the chamber to play a vital role in shaping the alternatives.”

Cirtwill said there were a number of areas where he and Sinclair have common ground.

“The list so far that I’ve heard, (what) we agree on so far, is: the environment is going to be critical to this entire discussion, that trade and transportation has to be more than trucks “¦ (and) that growing trade isn’t necessarily a bad thing,” he said.

“I think those three are a pretty good place to start.”

Sinclair said, while there may be some common ground, more disagreements than agreements remain over Atlantica.

While the pair reached a detente during the panel discussion, things turned sour when Sinclair raised concerns about minimum wage legislation.

“AIMS has takes an aggressive attitude towards public service, on your website you list unions and minimum wages and other things that are very dear to my heart,” he said.

“No, no, no,” said Cirtwill, “That is not what the website says, you have to stop repeating that because it is simply not true.”

Cirtwill said the references to minimum wage and union density on the AIMS Atlantica website do not advocate the abolishment of either.

“Atlantica is all about finding an economy that can maintain not only minimum wages we have, but better minimum wages going forward.”

To read a Commentary based on Charles Cirtwill’s remarks, click here.